Home
Science and Technology
TCL P635: what is the potential of a TV with Google TV? | Analysis / Review
Prev Article Next Article

The Smart TV TCL P635 is a model launched in Brazil in mid-July 2022, which stands out for coming with an updated processor and the Android operating system with the Google TV interface.

Will the brand’s new television meet the consumer in the promised image improvements? And what will the Google platform be able to deliver to the user? We’ve tested a unit over the last few weeks and we’ll tell you the details in this full review.

This model hit the market in three sizes: 43, 50 and 55 inches. The TV we have here is the one in the middle. It focuses on small spaces, which need very compact devices to not occupy such a large volume.

And in that, the P635 serves very well. The edges and thickness are thin, which makes the size more compact in all dimensions. The metallic frame still houses the brand’s logo, in the lower portion.

There are two little feet for support, each placed on one side. They are very close to the edge. If you prefer to mount it on the wall, the television is VESA 200×200 standard. On the back, you’ll find a USB port, one for wired internet, three HDMI inputs, one antenna, one RCA and P2 and optical sound outputs.

In the box, in addition to the TV and the bases, there is an adapter to connect with an RCA cable, the operating manual, the power cable, the screws and a remote control, already with two batteries included.

And speaking of the controller, it has a thin size, but is quite long. Despite not having the numbers directly on the accessory, there are several buttons, which may confuse you at first, until you understand what each one is for.

The ones that stand out the most are the shortcuts to streaming apps at the bottom, and here TCL didn’t skimp. You’ll have quick access to Netflix, Prime Video, Globoplay, Disney Plus, YouTube and TCL Channels. At the top, the button to use Google Assistant is highlighted.

Volume and channel switching can be toggled both on the main circle keys and on the dedicated buttons below. Overall, we understand that there are more buttons than necessary, and the manufacturer could have reduced the number to reduce the size of the remote. 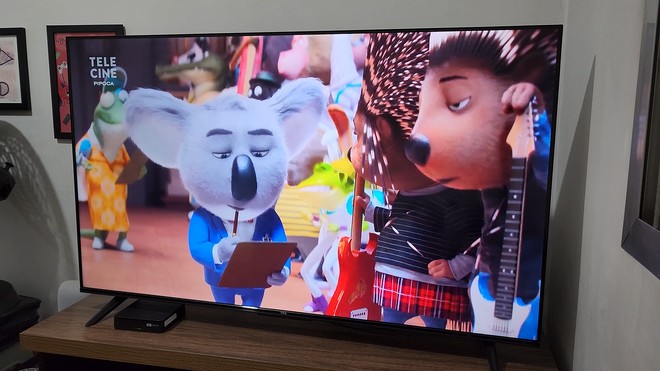 For this generation, TCL promised more color and four-frame contrast, as well as improved upscaling to 4K, thanks to the AiPQ Engine Gen 2 processor. the image.

What we saw was as expected for the improvements guaranteed by the brand. The colors are actually more vibrant and with little distortion from the side, even when dealing with a VA panel here. 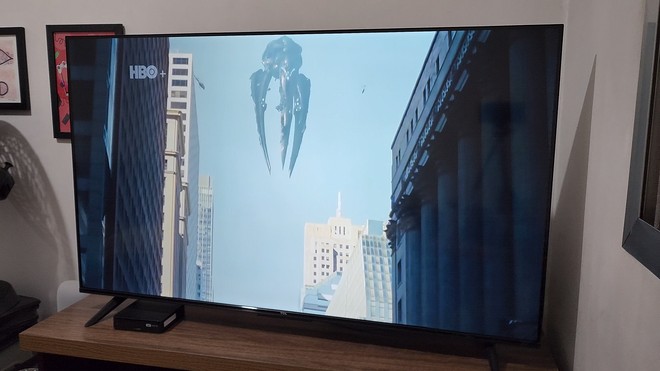 What we missed was brightness. 300 nits is often insufficient for optimal brightness, depending on what you’re consuming. And as this TV generates a lot of reflections, a higher light would do well to minimize these effects.

In addition, we have an image with satisfactory quality to watch television channels, with open digital tuning, or through cable TV decoders. The upscaling works decently, as long as you stay within two meters or so, so the granules don’t bounce off the screen.

Only on streaming services, the potential is explored in more detail, as it supports HDR10 in compatible content. But apps will be a subject for later. 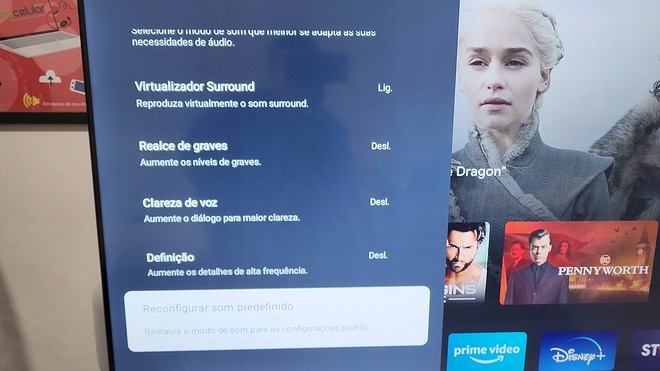 On the sound side, we have a total power of 20W that is very pleasing in any situation, in its 2.0 speakers. The volume is loud and of good quality overall.

Of course, here you won’t find technologies to make the audio even richer, such as Dolby Atmos and DTS. But TCL has put some options to improve the dialogues or bass, if you prefer. Now, if you want something above average, you’ll need to hook up an external sound bar for that. 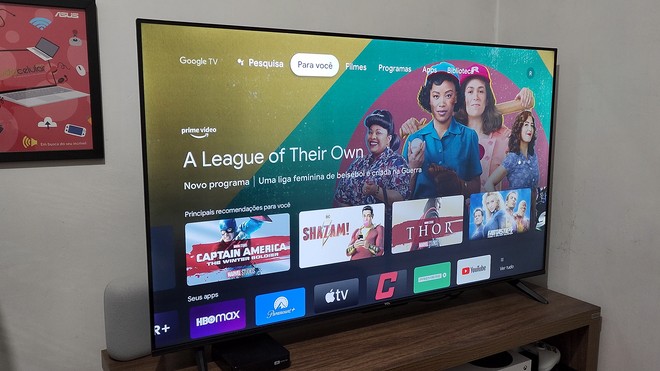 This TV comes equipped with native Android TV 11 under the Google TV interface. It brings easier access to different movies and series from multiple streams. It’s like a hub to house the best, with a selection of titles that you might like the most.

The idea is great, if it didn’t generate some difficulties in navigation. Starting with startup, if you don’t set it to quickly turn on where you left off, the delay is above what you might find in competitors like Samsung’s Tizen. At least, the slowness does not apply to the internet, as the device supports a 5 GHz Wi-Fi network.

Until the TCL and Google TV animations appear, if you need to see something urgent that is on, you will possibly miss the scene. Even when switching from some input to the home of the interface, the process takes precious time. And the shortcuts on the screen only favor recent apps, which can take patience until you open an app other than the ones that have dedicated buttons on the controller.

One of the features present here is the ambient mode, for you to leave the clock on the screen and images passing by. You can embed a selection directly from Google Photos, or keep some works present in Google’s Arts & Culture. 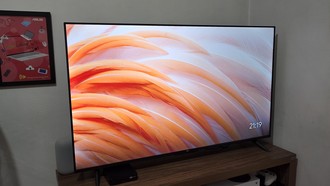 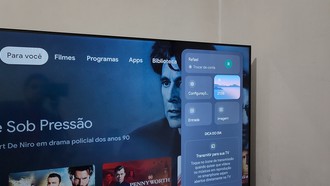 The presence of the Assistant also gives you more possibilities. From opening content in specific apps, to asking the temperature or controlling the connected devices in your home. All with the ease of the shortcut button on the remote control.

The list of apps is quite vast, thanks to the presence of the Play Store. Of course, not all the apps found on the cell phone are available here, but there are already options that are absent from competitors. As in the case of Premiere’s dedicated application, for example. 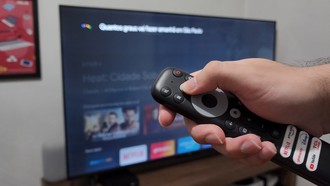 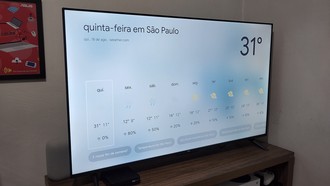 But not everything is perfect. We’ve noticed that the tools that are most optimized to work quickly are those that have shortcuts on the remote. The opening works with agility, just like in Disney Plus; videos easily go to maximum quality, especially on Netflix; and there are usually no stutters with live broadcasts, as in Copa do Brasil games on Prime Video.

By the way, this is a problem seen in a number of apps on this TV. In the case of Premiere, the broadcasts are not able to go to Full HD and are in a much lower quality, without any change. This was also noticed in matches shown by HBO Max, which is in lower resolution all the time in live.

In the case of Star Plus, the image even goes to the maximum possible on the ESPN signal, but there is a considerable drop in fps, which makes the image lose fluidity. In Combat, the application often doesn’t even leave the opening image.

DirecTV GO is another one that plays channels in low quality. In this case, have a secret to fix it. Just go back a few seconds in the schedule and press “Live”, or choose a channel and change it in the Guide. Even so, we are talking about something that shouldn’t happen. 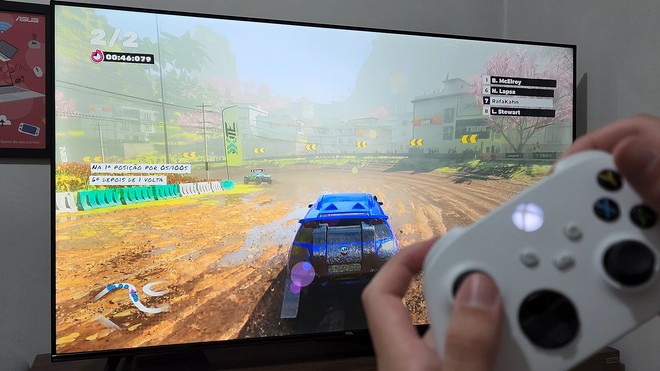 As this is not a television designed for gamers, you will not find resources here that significantly improve your gameplay. The panel has a rate of 60 Hz, well below what the most demanding gamers demand for a more fluid image.

The main function for games is in HDR10, which can be activated when playing a title in your video game. You can also put it in “Game” mode in the image preset, but that just makes the colors less aggressive.

At the very least, Steam Link support is guaranteed, which allows you to wirelessly connect your PC gaming platform to play directly on your TV. The experience is nothing but decent, with a better performance in titles optimized for the platform, like Street Fighter V, for example. 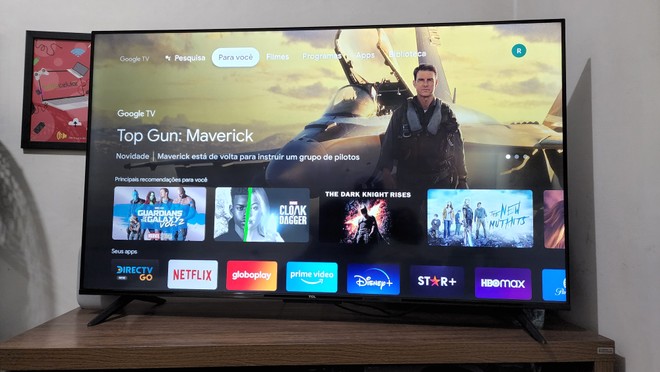 The TCL P635 proved to be satisfactory for what it proposes. That is, to deliver a TV with image improvements compared to its predecessor, a powerful sound and the Google TV platform, to have easy access to several movies and series, no matter the streaming, despite the slowness when browsing it.

However, it is still far from a top-of-the-line model, as is the case with OLED and QLED televisions. In addition to not being compatible with a high fps rate, which leaves gamers in the background here.

Another problem is the lack of optimization of some applications, especially those that are not among the priorities with shortcuts in the control and in live broadcasts. In this case, we can expect a software update to be enough to fix the flaws in the future.

It is worth it?

So, did you find this television satisfactory in what it promises? Would you have one of them in your living room or bedroom? And what was your assessment of the Google TV platform? You can interact freely with us there in the space below.